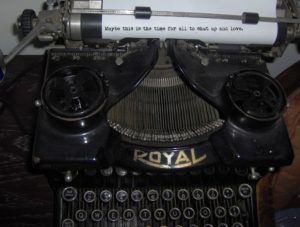 Last night we attended a lecture by the non-fiction writer Malcolm Gladwell. A valid point was put forth that there seems to be a rancor seething across the land. Everyone seems uneasy and easily angered. Many look at everyone else right now and see only the things in which we differ and not the many things we have in common. But when it gets right down to it, we all have way more in common that the few differences we espouse. There is a need there for all of us to accept the challenge of looking at (in) others for common wants and needs and desires and stop trying to fear and hate others who make be slightly different from us but not THAT different when you get down below the surface to the common human soul. 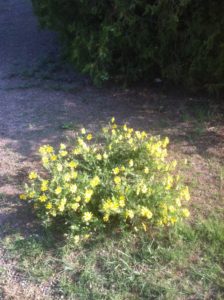 Wildflowers
The mountain air tickled goose bumps awake on Arlene’s arms and bare calves as she felt the pull of 60’s music. The thought of living in the mountains intrigued her—but not alone. She had tired of living alone, dining alone, driving to church alone. She glanced up at blue sky and muttered a simple, selfish prayer. Not to be alone. Without her little greenhouse to keep her busy back home, Arlene would doubtless go bonkers. Her flower orders had trickled to almost nothing though, so she welcomed this excursion as a break from routine.

Arlene frowned; hoping no one saw her standing here in her grass stained pants, and with her sweat stained bonnet. Arlene and her church group had just finished the annual spring cleanup at Camp Willbright. The church had received a monetary gift from a rich parishioner and had planned some impressive camp additions: a volleyball court, fresh paths and landscaping. They even hired a new director.

“Heard that song first in San Francisco,” a voice said.

Arlene started, the tone reminded her of Ted: rumbling, substantial. She had lost him a year ago, just five months after he took early retirement as a church music director. Arlene’s goose bumps worked their way further up, and her cheeks tingled as she faced the voice’s owner.

“I’m sorry. Didn’t mean to interrupt.” The stranger appeared about Ted’s age—if he were still—. This must be the new camp director. Arlene’s throat tightened and her eyes beaded with tears. The stranger’s cheeks had blushed pink in the cold air. His warm turquoise eyes beamed.

“That’s fine,” Arlene said, “I just wasn’t expecting anyone back here. I must look a mess.” Arlene fussed with the collar on her grimy Old Navy t-shirt.
The stranger smiled, and his grin spread like butter, putting her immediately at ease—like hot chocolate, warm socks, or daffodils. He appeared stately, even in his gray sweats, topped by his beige golfer’s hat with its green bill. He stepped forward, and Arlene caught his aftershave—spicy and as solid as his chin and shoulders. He must be a sportsman, because he still bore the appearance of strength. He offered his hand, and it pressed firmly in hers.Arlene felt the small place between her shoulder blades tighten. She had not been this close to a man since Ted died.

A surfer song blared from the loudspeaker. “There’s another oldie but moldy!” His eyes crinkled, lifted by his bright grin. “Beth loves that one. I tease her about it constantly.” His hand dropped after their brief touch, and he stared ground ward as if seeking lost change. “Names Ernest Caruso,” he said, over the swift opening of a melody.

“Arlene Bass. And no fish jokes!” she said.

He grinned and creased the bill of his hat. “I promise.” He crossed his heart.

“I haven’t seen you before. I thought just our church group was here,” Arlene said. “I didn’t attend last year. This is my first time—in a while.” She stepped back a tad in case she had worked up a sweat, so she wouldn’t offend.

He smiled and toed the plush campground grass with his tennis shoe, and a grasshopper flicked away with a rickety scratch of yellow wings.

Arlene smiled, smelling the sweet spring. She blushed and inside chided herself for thinking that this amazing man, with the slight graying temples, would not have a Beth, or a Roxanne or someone. Arlene stared down at the gold band on Caruso’s hand and remembered his mentioning Beth. All the good men were taken. Well, she could still initiate a friendship with him and dear Beth. It would be better than nothing. Yet, two made company—three a crowd.

“Beth like it here?” she said. Arlene looked down, as if hoping to help him find the coins his eyes seemed searching for in the grass. She felt her cheeks burn. He fidgeted with what sounded like other coins in his jacket pocket. Arlene saw a wistful expression spread across his generous face. She continued, “I’m sorry. I didn’t mean to pry.”

“Oh, it’s not that,” he said. He pulled his hand from his jacket and studied the gold wedding band she noticed earlier. Twisted it. “I guess I’m a sentimental old fool, or a romantic. Still wear it. You see Beth passed away two years now: an auto accident. I miss—she always helped me give places a woman’s touch, when we arrived. I guess camp will miss her knack with flowers and such. One thing death teaches is: seize the moment. I don’t take life for granted. That’s why I took this position when it opened.” He laughed, then coughed. “I’m rambling.”

“Oh, no. It’s nice to hear a gentleman talk,” Arlene said. “I miss my Ted’s conversation. Where did you get the live band?” The troop of musicians below began playing Baby I’m a Want You.

“From Baltimore. They’re staying in guest cabins. I have my work cut out perking this place up. Twenty-four cabins present a challenge for one guy to refurbish, repaint and provide with new landscaping. The church wants to spiff up the place. Want to stroll down closer? Take in the music.”

“I’m not presentable. I must be a mess, working all day,” Arlene said. She brushed at her hair. Getting to know someone new like Ernest scared her.

A blush rose in Arlene’s cheeks. She strolled down through the close-cropped grass toward the musicians and the smiling onlookers. A flash winked in the crowd, indicating someone had snapped a picture. Caruso followed a step or two to Arlene’s right. He strode confidant, yet casual. Maybe one did not have to stay—alone. She just needed to give Ernest a chance. No she must be making too much of their encounter.

“Speaking of wildflowers…I think you could plant some along the walks over there.” She pointed. “I have several varieties in my greenhouse ready to transplant.”

Arlene nodded. “I own a small greenhouse.” She tried to avoid grinning like some schoolgirl she would have frowned upon as a teen, but found it hopeless.

“Well, I guess I’ve found a landscaping expert; it seems. What do you think?” He winked. “Carpe diem, seize the day, I always say. Can I interest you in a snow cone from the refreshment stand, while you share flower advice?”

Arlene relaxed. “If I know anything,” she said, “it’s flowers…and seizing the day.”

Caruso beamed that perfect smile she noticed attracted her like fresh-cut flowers. “I can see that, Mrs. Bass. I can see that.” His eyes crinkled, and he and Arlene strolled together toward the refreshments.

Arlene walked, glancing at the shape of clouds, smiling. She hesitated.

He glanced at her, puzzled. “A penny for your thoughts?”

She felt warmness spread out from her heart to her fingers and toes. The nearness of another thoughtful human being felt so right. “Nothing. I was just thinking that front wall,” she pointed, “would be a good place for wildflowers.”
Where is Alan Ginsberg?
I Fear a multitude of minds wallowing in their ineptitude and madness,
who wish to build a wall of isolationism. Who do not realize who provides
the bread for them to butter, picks their crops, or cleans their toilets. Fat and bloated
waving their 44 ounce convenience store cups;
waving their stars and bars, vehemently holding their god hates fags
signs and their burning crosses; putting words in our founding fathers
mouths; rewriting our history books promoting only a god who
tortured Galileo, denying History that shouts its warnings to deaf ears,
warning of its repetition when ruled by the proudly ignorant.
I fear the 21stcentury minds putting dinosaurs on Noah’s ark;
future fascist leaders providing us with our convenient common enemy;
telling us what to think and believe; giving us the means to the absolute selfie
we desperately seek for our fifteen minutes
though we’ve long forgotten who Andy Warhol was, or what he warned of.
I fear we’ve forgotten you Allen Ginsberg…
among many other things.