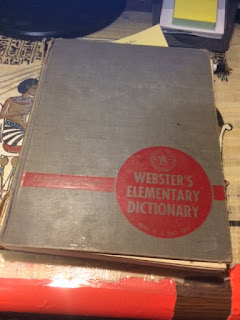 In Tularosa school, first or second
grade. I was in the bathroom and
got called to the principal’s office
where I was worried I would
be punished for some infraction.
Instead, the principal presented
me with a dictionary. He had seen
me carrying an old battered one
around the school—my early love
of knowledge and words—and gave
me the signed dictionary. It became
a prized possession. Later, my parents
purchased us a set of Encyclopedia Britannica
which must have set them back a fortune
and which I enjoyed reading “for fun” in my
thirst for knowledge.

In Lemitar, New Mexico we boys played one
game to test one another’s bravery
in the dilapidated graveyard next
door to the school with its chipped,
hard to decipher tombstones and
leaning, wooden crosses.
A boy had to stick his arm down
into one of the gopher holes
inundating the graveyard’s mesquite
and tumble weed-adorned surface
because he had been “dared”
and of course one had to respond
to being dared or one faced the horrible
nomenclature of: chicken.

We played that game along with
marbles, jacks and horses—where
the girls were horses and the boys
were cowboys and had to capture
them—at the risk of being kicked in the chins.
We stuck our arms down into those graveyard
Holes until a boy, I can’t remember who
Said that something inside the hole:
gopher, ghost, a child’s wild imagination?
touched his hand. This led us to search
for other games that did not delve as deeply
into the mortal fears of a grade school child. 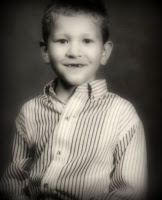 I became a father during one of the coldest winters on record in the Permian Basin. I was working for Dowell as a Service Supervisor and we were cementing several wells between Midland and Andrews. They were deep wells and so the cement jobs were in stages. Barbara had had a tough pregnancy suffering from toxemia, I believe it’s called without looking it up again. You think one would remember that but I’ve never been good with the names of diseases or the medications that fight them.
Around Thanksgiving, Barbara was hospitalized and unbeknownst to us the hospital was doing the worst thing they could for her: giving her a saline drip when it turns out she had too much salt in her system as it was. She was fighting to keep from having our son way early. She held out, but then later, the last few days of that year of 1983 the doctor said that would have to induce or possibly lose Barbara and the baby.
So, it was back in the hospital. This time in Midland/Odessa instead of Monahans. Cold. So cold. Barbara’s parents were both there and my sister and mother. My mom was on crutches. She was always having trouble with her knees and I believe that was before she had them both replaced.
There was another young woman in the emergency pediatrics at the same time as Barbara and she had her twins too early and they did not survive. But I remember hearing them crying.
I did not stay in delivery with Barbara. It wasn’t as common in those days. Barbara’s mom did. Then, she was a registered nurse and there wasn’t much she hadn’t seen.
We were on a different floor waiting around like you always see in the movies and when word came that labor was over and I was a father, I raced down to the room where they have the babies to see my son. Jim, Barbara’s father, in the confusion, thought that I was making a run for it from the hospital and that became a family joke.
The oilfield waited for no man, so as soon as I knew all was stabilized, I had to return to the cement job. There were several wells we were servicing and I would supervise running the first stage of the cement job and then run visit my new family at the hospital. Then back to the rig, drop the plug, and perform the second stage of the cement job.
Our son couldn’t wait to see the world, but Barbara held in there so that he was only six weeks early. He was so tiny. Looking back now, I don’t know how we thought we could be responsible for something so little and helpless. Two kids in their early 20’s without enough sense to worry too much.
Microwaves were fairly new. They were huge also. We bought a refurbished one (they were expensive also) to heat formula in. And heavy. It was all I could do to carry it into the house by myself.
Cabbage Patch kids were the craze that holiday, so it was almost impossible for us to find preemie diapers for our real kid.
And there was more excitement to follow. Changing his diaper one day, I noticed something unusual. Didn’t want to acknowledge it, but something was wrong. Back to the doctor: double hernias. Our tiny preemie would have to endure his first surgery that winter: double hernia repair.
So….that’s what I remember about first becoming a father. I always thought that being a parent made one a better teacher. I saw it when several teachers I knew had their own children, because being a parent wises one up…. or should. It changes you, when a person becomes a parent one realizes that you are not IN CONTROL of life. Parenting humbles or should humble one. It introduces you to someone who, for a few years, you are totally responsible for. After that, well, my grandfather said one never gets rid of that responsibility. It’s a lifetime commitment. That’s what being a father is. A lifetime commitment…. but worth the price.