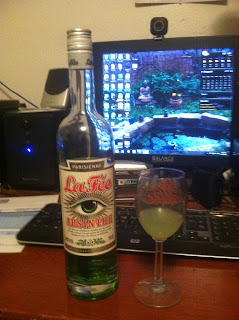 Absinthe was banned from import into the US until recently, the excuse being that the wormwood was toxic. Even though it was used as the main ingredient in many stomach ailment drugs. The unique ingredient, wormwood ,mixed with the alcohol was thought by many artists to release an almost hallucinatory experience. Writers who partook of the Green Fairy included Ernest Hemmingway, Guy de Maupassant, Arthur Rimbaud, Charles Baudelaire, Oscar Wilde, and Vincent Van Gough. Today, Marilyn Manson is probably its most famous devotee, according to Absinthe101.com.

One of the causes for absinthe’s popularity was the Great French Wine Blight. The catalyst for the loss of thousands of French vineyards in the mid-1800’s was the phylloxera, a parasitic aphid carried over at some point in the same century from its native North America. The aphid fed on grapes and ravaged French vineyards for as long as a decade. Wine production in France hit a standstill. French soldiers who had been using absinthe as a cure for everything from malaria to migraines found the drink to be a worthy replacement for the lacking wine. (Absinthe101.com)

There is a popular custom of preparing absinthe by pouring it over a sugar cube into chilled water which makes the water turn a milky color.

The artist Henri de Toulouse-Lautrec made it famous as he imbibed of the Green Fairy as he produced his art while partaking in the bohemian lifestyle of the darker Paris streets.

A toast to finer syntax and diction….