An excerpt from Mordake

An excerpt from Mordake 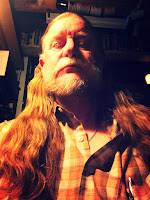 “He’s captured it, sí. But mythical it is not.” He pulled up his sleeve to reveal marks that looked as if a tiger had mauled him. Old marks, healed now, like a hideous brand, claimed by a hideous master. “No, I can say no more. Just leave me. I wouldn’t return there for all the gold in your Fort Knox, or all the putas in Ciudad Juarez.”

“Harold would take me. If he could.”

“Harold is crazy.” Joaquin twirled his index finger around near his temple. His bottom lip was a fat worm and trembled when he spoke. “What has he told you?” He seemed genuinely curious. He pulled his black silk shirtsleeve down. The walls of the Joaquin’s dressing room oozed a dull yellow color that one could have listed in a descriptive catalog as oppressive. Two mating flies crawled clumsily down a nearby wall. Joaquin brushed a larger one away from his drink-glazed brown eyes.

“Not enough. Look, I can make it worthwhile, money wise. Name your price. My father’s a rich American son-of-a-bitch.” Joaquin’s eyes narrowed. He scratched the side of his cheek with a dirty fingernail.

An excerpt from Mordake a novel in progress.